“We will dance and be merry…
We favor coexistence.”
-Mahmoud Mansour, Jaffa, Israel

In Israel, a Wedding of Jew, Muslim draws hundreds of protesters. Israeli police restrained more than two hundred protesters from crashing a wedding for a Muslim man and a Jewish woman. Despite their hateful phrases, the couple celebrated a marvelous wedding.

It was reported that the father of the bride was saddened that his daughter chose to convert Islam but the groom, Mahmoud Mansour, had a very positive message to share:

“We will dance and be merry until the sun comes up. We favor coexistence.” 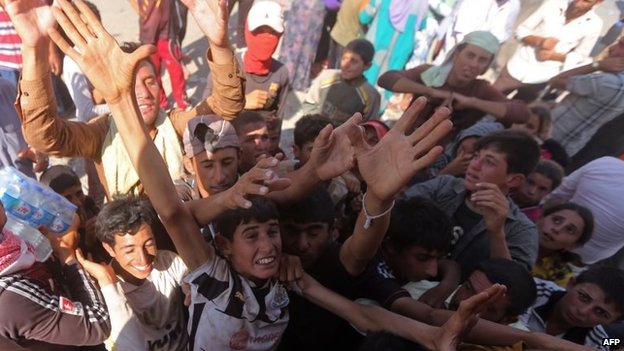 We are very sad to report that Christians, Yazidis and other religious minorities continue to be murdered in Iraq and Syria by the Islamic State (IS/ISIS).

Rescue missions have been led by Kurdish and Iraqi military forces and aid drops have helped refugees trapped on Mount Sinjar.

Christians, Yazidis need more than escape: Catholic Relief official in Iraq is an interview that provides insight into the long-term strategies needed to help refugees. The interview provides a glimpse into the solidarity among Iraqis and the organizations working on the ground.

There are approximately 4,200 religions practiced on Earth and Deseret News has compiled a glimpse into 15 interesting religions you may not know about. It is not clear how many of these are practiced within the United States; however, the Pew Research Center has determined that the U.S. population is 78.4% Christian.

Click here for a summary of Pew’s research findings.