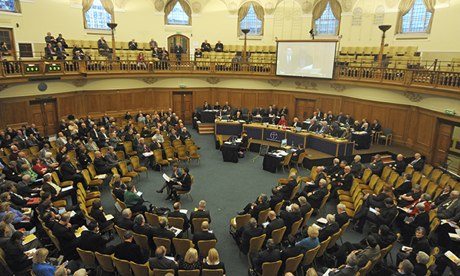 The Supreme Court announced on Tuesday (Nov. 26) that it will decide whether for-profit businesses can be treated like religious entities in a politically and constitutionally freighted test of the Obama administration’s mandate that employers include free contraception coverage as part of their health plans.

The cases, which will probably be argued in March and decided in June, will not deal with a string of other lawsuits over the mandate that have been filed by nonprofit faith-based groups. Those complaints are still working their way through the lower courts.

The Church of England is on course to give its final approval to female bishops next year after its General Synod voted in favour of new proposals to bring women into the episcopate, raising hopes of an end to the damaging and frequently bitter 20-year standoff between modernisers and traditionalists.

On the third and final day of its meeting in London, the synod voted in favour of the new plans by an overwhelming majority of 378 to eight, with 25 abstentions.

Conducted by the European Union Agency for Fundamental Rights, known as the FRA, “Discrimination and hate crime against Jews in E.U. Member States: experiences and perceptions of anti-Semitism” surveyed 5,847 individuals 16 years old and over who considered themselves Jewish, residing in Belgium, France, Germany, Hungary, Italy, Latvia, Sweden and the United Kingdom.

The headline figures were frightening enough. Across Europe, 66% of Jewish people see anti-Semitism as a problem in their respective countries today — as high as 90% in Hungary and 85% in France. The perception, moreover, is that over the past five years, the level of anti-Semitism has increased, with 76% of respondents saying it had gone up a lot or a little.

Multiple news outlets, including the Independent and Slate, recently linked to a story, originally posted in English on YourJewishNews.com, claiming that a Hasidic group banned soy products because they ‘lead to homosexual sex.’

The problem with this outlandish story was that it was completely unverified; none of the outlets actually interviewed or did any on-the-ground investigation. Ultimately the story was retracted, but the damage was already done.

Misreporting on insular religious societies like the Amish or Hasidic Jews may be due to a number of issues, from the difficulty of contacting individuals for interviews to the fact that insular communities are less likely to challenge a story.

The FBI is reporting that hate crime incidents were slightly down last year.