Peacemakers preparing for a stable Syria 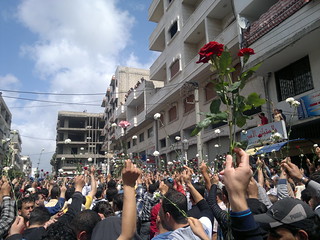 Last month in Amman, Jordan, Peacemakers Hind Kabawat of Syria and Nozizwe Madlala-Routledge of South Africa delivered a series of trainings to a new generation of Syrian activists dedicated to rebuilding civil society in a post-war Syria. Though Syria is anything but peaceful now, the activists are preparing themselves by learning from the firsthand experiences of individuals like Nozizwe, who participated in South Africa’s transition from an intractable Apartheid regime to plural democracy. This week, another Tanenbaum Peacemaker, Ivo Markovic of Bosnia, is joining Hind to share his on-the-ground experience rebuilding shattered societies in the Balkans and building trust among religious and ethnic groups. The Syrian activists in attendance will learn directly from living examples of individuals and communities that sowed the seeds of peace in the midst of violence.

The trainings, running from January to May, focus on developing activists’ skills and knowledge in conflict resolution, transitional justice, reconciliation, and civil society building – issues that will be central to rebuilding a post-war Syria. Nozizwe and Ivo’s trainings will add to this by providing an examination of countries that emerged peacefully from years of armed conflict, with invaluable lessons to be learned for Syria.

Like all wars, the violence in Syria will end one day and the difficult work of rebuilding a shattered country will begin. This is precisely the moment for which Hind, along with her fellow Peacemakers, is helping to prepare Syrian activists.