The State Department announced this week the creation of its first office dedicated to outreach to the global faith community and religious leaders.Sikhs Remember Tragedy By Embracing Faith •  Pope on homosexuals: 'Who am I to judge?' • Iran’s supreme leader issues edict on banned sect, tells people to avoid dealing with Baha’is • This Heroine Wears a Burqa to Fight Evil • State Dept. seeks to broaden religious reach 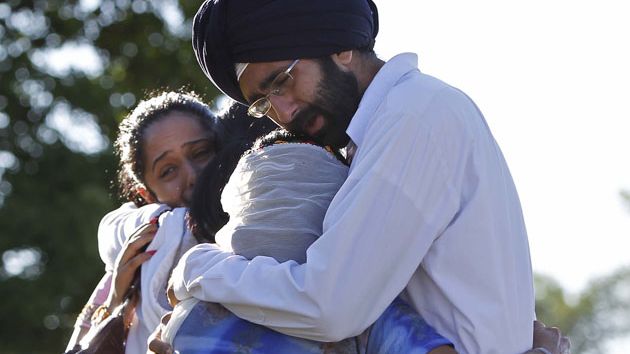 On August 5th, 2012, a gunman opened fire at the Sikh Temple of Wisconsin in Oak Creek, just south of Milwaukee. He killed six people. This August, the temple will hold a series of events to honor the victims, including a continuous recitation of the Sikh holy book, cover to cover. It's a ritual that happens at both happy and sad events, and is intended to bring peace and solace. (Photo credit from Mother Jones)

Pope on homosexuals: 'Who am I to judge?'

On the flight back to the Vatican from Rio de Janeiro, Pope Francis fielded questions from reporters in the plane's press compartment. The Pope answered many questions, but the one gaining the most attention is: when asked about the Vatican's alleged "gay lobby," the Pope replied that while a lobby might be an issue, he doesn't have any problem with the inclination to homosexuality itself: "Who am I to judge them if they're seeking the Lord in good faith?" he said.

Iran’s supreme leader is urging Iranians to avoid all dealings with members of the banned Baha’i sect in a possible prelude to further crackdowns on the minority.Iran already bans the Baha’i, a religion founded in the 1860s by a Persian nobleman considered a prophet by followers. Muslims consider Muhammad the final prophet. Many consider Baha'is to be among the most discriminated against religious minorities worldwide.

This Heroine Wears a Burqa to Fight Evil

A new cartoon in Pakistan features an unusual role model for female empowerment: a woman who uses martial arts to battle colorful villains such as Baba Bandooq, a Taliban-esque figure who tries to shut down her school, and Vadero Pajero, a corrupt politician. In the cartoon, a schooteacher, Jiya, transforms into the heroine by donning a burqa. There are supporters and detractors abound.

​The State Department announced this week the creation of its first office dedicated to outreach to the global faith community and religious leaders. The State Department said the new office “will focus on engagement with faith-based organizations and religious institutions around the world to strengthen U.S. development and diplomacy and advance America’s interests and values.”