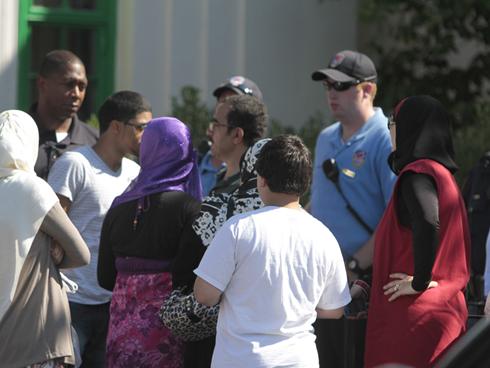 Playland amusement park, located just north of New York City, was shut down yesterday after interactions between a group of Muslim visitors and law enforcement became violent. Details are still emerging, but it is certain that Muslim women wearing head scarves were denied entry to a ride due to a safety policy and that the resulting scuffle led to the arrest of 15 park goers and hospitalization of two police officers.

There are many questions that could be asked. Did park officials painstakingly tell the tour organizer about headgear restrictions, as they claim? Were the 3,000 Muslim tour participants made aware of the safety policy by the tour organizer or by adequate communication directly from the park? Was any effort made to review and edit the policy so that it satisfied safety concerns and religious requirements? Why did this escalate into a violent exchange between law enforcement and the Muslim community?

Of note is that someone had the foresight to predict that the headgear restrictions could cause a conflict. It is unknown how widely this concern was expressed, but it seems no one proactively attempted to resolve the issue. A simple conversation between park officials and leaders of the Muslim group about satisfying safety concerns while respecting religious traditions could have avoided a Muslim community feeling marginalized, law enforcement officers suffering injuries, and both law enforcement and Playland experiencing negative publicity.